Request a Quote for Irvine 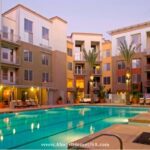 Needing temporary housing in the Los Angeles area but wishing to be away from the hustle and bustle of downtown?  Almost Home’s Irvine CA corporate housing is your answer.  Our housing specialists can outfit you with whatever furnished apartment in Irvine that you want.  Give us a call or fill out our simple, short web form.

Irvine is an affluent suburb of Los Angeles. It has received numerous accolades from publications over the years touting the expansion and high income levels of the population that resides here. CNN Money labeled this “the fourth best place in the US to live” and a number of other similar awards have befallen on this city. The US Census Bureau reports that Irvine has the seventh highest median income, while the FBI reports that Irvine has the lowest crime rates in the country. It also has one of the top ten highest growing job markets in the country.  Clearly Irvine corporate housing is in an excellent location.

Hide Map
There are numerous International companies represented in Irvine like Toyota, Toshiba, Aikken, Asics, and Mazda. There are also a number of domestic corporations that headquarter in Irvine. Some of these include Taco Bell, Ruby's Diner, LA Fitness, Ford's West Coast Design Center and Allergen Inc., just to name  a few. Academia is also a large revenue engine with students coming from all over the country and other parts of the world to study at world class institutions including Concordia University, Orange County Center of the University of Southern California, Pepperdine University, California State University, University of California, Brandman University, Irvine Valley College, and University of La Verne.  Many adjunct professors opt to use Irvine CA furnished apartments when doing short term training.

Irvine temporary housing residents can enjoy a Mediterranean. Temperatures vary mildly over the course of the year between highs of the cooler months of 68°F in January to 85° in August's summer peak. The lows range between 41° in January to 61° in August. Precipitation is highest in January.

Prior to European settlement, Irvine was inhabited by the Gabrieleno tribes almost two millennia ago. The Spanish explorer Gaspar de Portola arrived in 1769 which resulted in the construction of forts and missions for the Spanish Monarchy. When Mexico gained its independence from Spain, they began distributing the lands to citizens who applied for it. In 1878 James Irvine acquired a total of 110,000 acres of land that stretched from the Pacific to the Santa Ana River. The resulting ranch passed to his son when he died in 1886. Irvine Jr then converted the land to field crops. The Santa Fe Railroad arrived in 1888 and honored Irvine Sr. by naming the stop after him, but the town that sprouted around the station came to be known as Myford, after James Irvine Senior’s grandson, Myford Irvine. Myford was renamed in 1914 to Irvine.

Things to do in Irvine

Irvine corporate housing and furnished apartments by Almost Home is your first and best source for your short term housing needs.  Do not hesitate to ask for a quote today.